Shatner Scheduled to Come to Fort McMurray in March

Recently, the announcement that William Shatner would, once again, visit Fort McMurray sparked the interest of many area fans. Shatner is most known as Captain Kirk from Star Trek, but has also appeared on a number of other TV shows, commercials and in a few movies. He is a legend and fans look forward to his arrival.

Keyano Theatre's The Affair for the Arts

The Affair for the Arts will be held at the Keyano Theatre on March 15th. William Shatner will be the guest artist this year. He will speak and the event has been named, "An Intimate Evening with William Shatner."

This event is used to help raise money to support the theatre. Sponsors contribute to the excellence of the Keyano Theater & Arts Centre as they continue to instill arts and culture into the community. Sponsors also gain the opportunity to attend the event.

Sponsorship levels for this event include: 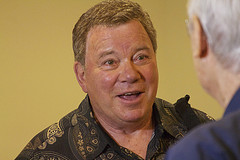 Shatner has over 50 years of experience as an actor, producer, writer, recording artist and directory. He has won five Emmy nominations and was awarded two Emmys, One Golfed Globe, three Gemini nominations and he won the Governor General's Performing Arts Award in 2011.

He's a best-selling author with nearly 30 titles including:

The series Raw Nerve is currently on the air and features Shatner interviewing celebrities. He is also heavily involved in charity work and the star of the Priceline commercials.