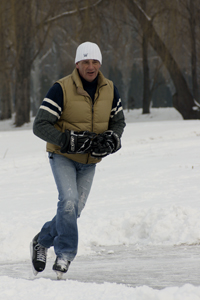 During the winter, the city of Fort McMurray sees a number of outdoor ice skating rinks pop up all over the city. Many of these rinks will open, weather permitting in mid-December. As long as the ice is thick enough and the weather cooperates, residents can enjoy skating outside on one of many rinks.

The boarded rinks provide a place for hockey, figure skating and more. These rinks are maintained by the city and will open as soon as the weather is cold enough and the ice is thick enough. Most will stay open until spring.

Other boarded rinks are found throughout the rural areas around Fort McMurray including:

Along with the many boarded rinks, other rinks may be found that are not maintained by the city.

It's nearly that time of year and the rinks will be opening very soon. If you love ice skating, now is the time to get your skates ready for the season.