8 Best Neighbourhoods in Fort McMurray: Where to Live in 2023 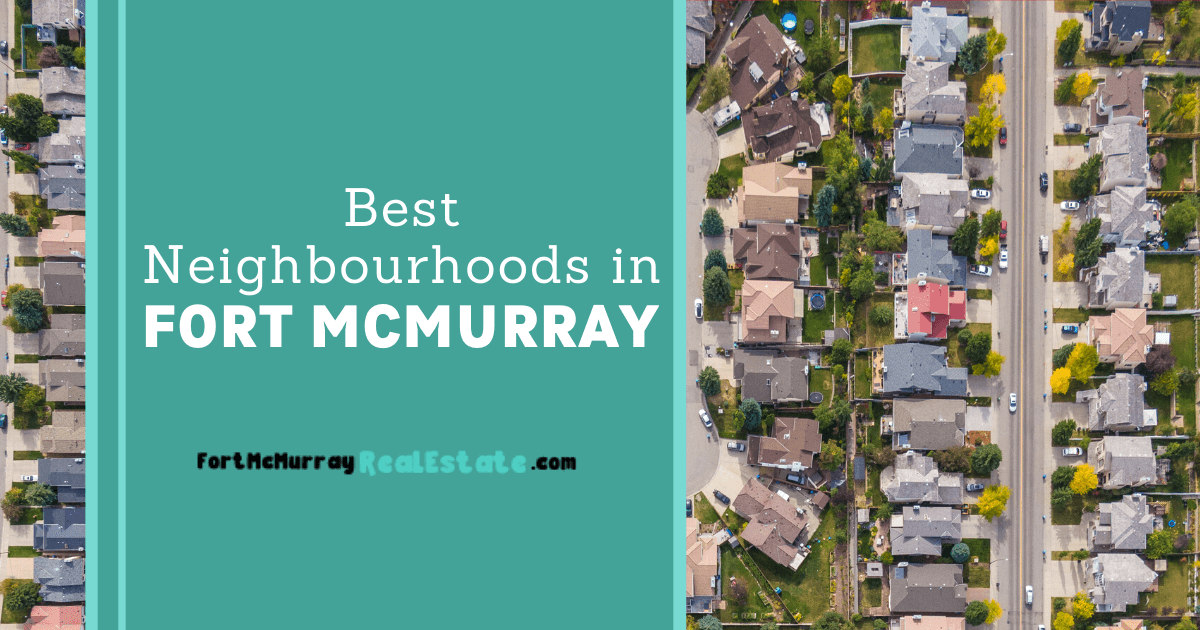 Located in the province of Alberta, Canada, Fort McMurray lies in the middle of the Athabasca oil sands and is surrounded by a boreal forest. While initially a city in its own right, Fort McMurray has since been redesignated as an urban service area after it was merged to form the Regional Municipality of Wood Buffalo in 1995.

Found along Memorial Drive heading into Fort McMurray, the Beacon Hill community is a quiet getaway from the nearby downtown area. People moving to Fort McMurray will appreciate that Beacon Hill is only a short drive from prime commercial areas.

Other Beacon Hill area hotspots and amenities include Thrifty Dutch Girl, a woman's thrift boutique shop; Brewskis Pub, founded in 2011 and serving quick bites and more elaborate meals; and Beacon Hill Park, a park with sports facilities, a playground, and picnic area that is open year-round.

Like many communities in Fort McMurray, the neighbourhood of Dickinsfield is known for its natural beauty and access to outdoor recreational activities. These activities include hiking, biking, and skiing at the Birchwood Trails, a series of beautiful, wooded trails surrounding the region.

One of the most populous communities in the area, the community of Timberlea is located in the northwest corner of Fort McMurray. Timberlea real estate comprises 18 separate subdivisions and offers residents access to area parks and outdoor spaces, many with walking trails for active residents.

Homes in Timberlea cost between $90,000 and $1.2 million. House sizes in Timberlea vary between two bedrooms, two baths to seven bedrooms, three baths. Residences in the area also come in a wide selection of home types, including townhomes, condos, and single-family homes.

Timberlea has many restaurants to choose from, including Prairie Donair, a family-owned and operated restaurant that offers authentically cooked meals; Pizza Plus, serving pizza, pasta, and sandwiches; and Mucho Burrito Fresh Mexican Grill, with fresh Mexican-inspired food.

There are also several bars and breweries in the Timberlea area, including the East Village Pub & Eatery, a local pub run by a mother and son team; The Canadian Brewhouse, a sports-centric brewery that also has a selection of pub favourites; and The Banquet, which offers food, drinks, and games.

Home to Fort McMurray's minor league hockey club, the Oil Barons, Thickwood is surrounded by woodland and is found in the northwest part of the Fort McMurray area, south of the Timberlea community. The community of Thickwood has well-maintained green spaces throughout.

The homes for sale in Thickwood are comprised of various types, including bungalows, townhomes, and condos. Home prices in the area average between $128,000 and $965,000. Homes in Thickwood range in size from two bedrooms, two baths to seven bedrooms, four baths.

Thickwood has a selection of shopping locations, including Thickwood Shopping Plaza, with over 21 stores and eateries; Save-On-Foods, a grocery chain found across Canada; and The Meat Shoppe, a locally-owned butcher shop offering smoked sausages, jerky, and other meat products.

Other Thickwood hotspots include Wood Buffalo National Park, an over 27,000-square-mile National Park, making it Canada's most significant; the Fort McMurray Golf Club, found along the banks of the Athabasca River and offering a 27-hole golf course; and MacDonald Island Park, with many state-of-the-art facilities, including a golf club, pool, and other fun activities.

Local restaurants in the Thickwood area include Mary's Brown Chicken, offering a variety of chicken dishes; Blue Diamond Restaurant, serving juicy steaks, Chinese noodles, and more; and The Fish Place, a seafood restaurant with a variety of breakfast items to choose from.

The Abasand community sits atop a portion of the original Abasand Oil Sands property. The Abasand homes for sale are elevated above the rest of the surrounding area, offering beautiful views of Fort McMurray and the surrounding region. Located just minutes from the main highway, Abasand has many area trails and greenbelts.

Home prices in the Abasand area usually range between $150,000 and $699,000, with houses in the area a mixture of single-family homes, townhomes, and condominiums. Home sizes tend to range between three and four bedrooms.

Area restaurants are located to the east of the Abasand community and include Yoshi Japanese Restaurant, with a selection of different types of sushi, bento boxes, and other Asian favourites; Cedars Bakery & Restaurant, offering an expansive menu of kababs, shawarma, and baked goods; and Yasso's Greek Cuisine, a local Greek restaurant.

Local bars near the Abasand neighbourhood include Tavern on the Main and Bailey's Pub, which has karaoke and comedy nights. Nagaad's Boutique is an area retailer that sells clothing, accessories, and other items.

Shopping locations in the Downtown area include the Peter Pond Mall, featuring a variety of stores, restaurants, and entertainment venues; The Source, a local game store selling games, systems, and other electronics; and Mark's, offering clothing in a variety of styles for men, women, and children.

Residents can also visit the Fort McMurray Heritage Village, a collection of historical buildings where visitors can experience a part of Fort McMurray's past, and Borealis Park, a small area park with a 0.3-mile walking trail.

The Gregoire community is located to the south of Downtown Fort McMurray and sits alongside Memorial Drive, serving as the Industrial hub of Fort McMurray. The community is also the home of the Oil Sands Discovery Center, where residents can learn about the history, science, and technology of the oil sands the area is famous for.

Gregoire real estate prices range between $150,000 and $996,000. House sizes range from two bedrooms and one bath to six bedrooms and five baths. Homes in the area come in various types, including condominiums, modern contemporary, and custom-designed homes.

Local eateries near the Gregoire community include OJ's Steak and Pizza, with salads, pizza, and subs, among many other delicious menu items; the Urban Kitchen Table, located at the local Radisson Hotel & Suites; and Tim Hortons, a Canadian chain that sells coffee, baked goods, and other food items.

Other hotspots in Gregoire include The Den, a local sports bar that also has a pool, darts, and arcade games; Mary Brown's Chicken, which serves mouthwatering signature chicken dishes, and potato wedges; and Fort City Play World, an indoor playground with a variety of activities for children of all ages.

One of the newest neighbourhoods in the Fort McMurray area is Eagle Ridge, bordered by the Birchwood Trails. Eagle Ridge is a combination of urban and residential living, offering a variety of stores, restaurants, and other locations for residents to enjoy.

Homes for sale in Eagle Ridge vary in price between a low of $420,000 and a high of $815,000. Housing types in Eagle Ridge include low-rise condos, townhouses, and luxury homes, among others. When it comes to size, homes are as tiny as two bedrooms, three baths and as large as seven bedrooms, four baths.

Other popular locations in the Eagle Ridge community include Eagle Ridge Pond, a local green space where residents can have a picnic, get some sun, and enjoy the outdoors; Landmark Cinemas, an eight-screen movie theatre; and the local Save-On-Foods store, selling a variety of everyday household grocery items.

Make Yourself at Home in Fort McMurray's Best Neighbourhoods

Despite its distinction as an urban service center that is a part of the larger municipality of Wood Buffalo, Fort McMurray is still thriving city in its own right.

The robust energy industry provides many jobs in Fort McMurray. This has led to a boom in the population as people move to the area searching for jobs in the oil industry — and many of them choose Fort McMurray's neighbourhoods as their home. In addition to employment opportunities, the low cost of living in Fort McMurray and the numerous desirable neighbourhoods make this city one of the most popular in Alberta.